Waterfront Clean up at Jericho

This has been a long time in the planning phase but apparently now underway: 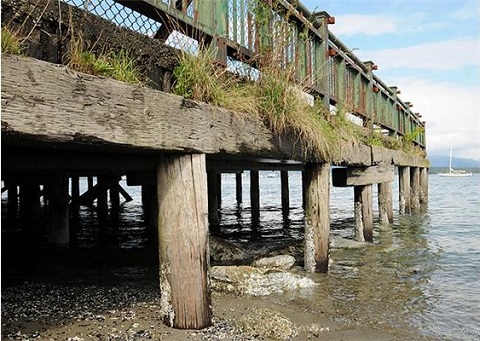 The historic Jericho Beach Marginal Wharf will face the wrecking ball Tuesday as Vancouver park board officials prepare to spend $2 million to restore the waterfront to its natural state.
Vancouver Pile Driving Ltd. is on site to start demolishing the wharf, once part of a military seaplane base which opened as Vancouver’s first airport in the 1920s.
The project will proceed in two phases. The first phase will include removing wood that has been treated with preservative creosote, installing fencing and ocean floats for the safety of boaters, paddlers and swimmers, protecting trees and removing the Lion’s Gate Bridge railing for storage and future reuse.
It also includes starting the beach restoration and foreshore protection, which is expected to be completed by the fall.
The second phase will see further beach restoration and historical interpretation, which will be presented to the public later this year. Heritage considerations include a First Nations’ settlement, a logging operation in the late 1800s at “Jerry’s Cove” from which the name Jericho originated, and Vancouver’s first airport on the natural beach that operated from 1920 through 1939.
The site, located east of the Jericho Sailing Centre, will be closed until work is completed by the fall of 2012.
Park Board officials said the wharf is nearing the end of its life and had to be repaired or replaced to maintain public safety. The Jericho Sailing Centre also complained the wharf poses a hazard to sailors, and the Department of Fisheries and Oceans warned of continuing environmental damage from the 70-year-old pilings.
ksinoski@vancouversun.com

For more detailed information, please contact us by telephone or e-mail:

Trust Patricia Houlihan's knowledge & experience as a Professional Realtor and Lawyer... ranked in the Top 1% of Greater Vancouver Real Estate Agents in 2012, 2014, 2016

For more detailed information, please contact us by telephone or e-mail:

Trust Patricia Houlihan's knowledge & experience as a Professional Realtor and Lawyer... ranked in the Top 1% of Greater Vancouver Real Estate Agents in 2012, 2014, 2016

WHAT CLIENTS ARE SAYING

"I just wanted to pass along a heartfelt thanks to you and your team for selling our house. We really appreciated your open, honest approach from the start..."